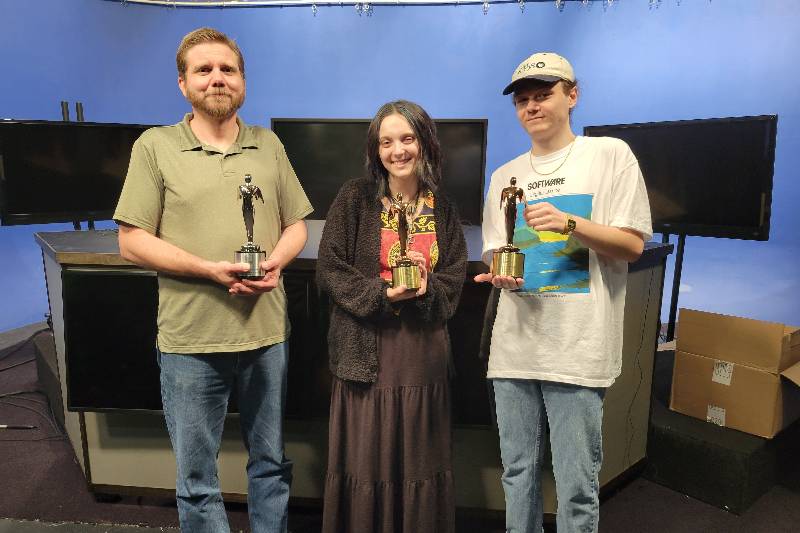 University of Central Missouri student producers at KMOS-TV who were honored with PBS Telly Awards are, from left, Tim Oar, Cassidy Lesire, and Paris Norvell.

WARRENSBURG, MO – KMOS-TV, the PBS station licensed to the University of Central Missouri, recently received six Telly Awards honoring excellence in local television programming. Three of these awards were given to KMOS student producers competing against established producers in professional categories: Cassidy Lesire, sophomore, created a short documentary about one company’s inclusive message and accomplishments; Paris Norvell, junior, helped viewers learn about the state of online threats from a cyber security engineer protecting a large school district; and Tim Oar, senior, created a touching profile of a thriving community of musicians and historians. All of these productions are available online.

“UCM students employed at KMOS-TV gain experience in all aspects of the operation, and they enjoy the opportunity to demonstrate their talents and contribute to the station’s success,” said General Manager Josh Tomlinson. "The fact that these students were honored in categories alongside professionals from organizations like CBS Viacom, The Olympic Channel and Al Jazeera TV is a perfect example of how the talent of the students, the quality of their UCM education and the opportunity provided by KMOS-TV come together to provide an experience like no other."

Each of these UCM students majors in Digital Media Production, and over the summer two of them continued their education through internships: Norvell with public radio station KCUR in Kansas City, and Lesire with Disney World Florida. After graduating in May, Oar worked with the KMOS production staff on the latest season of the KMOS flagship series “Making.” He currently teaches Dital Media Communications at State Fair Community College in Sedalia.

Two other KMOS projects honored with Telly Awards were the documentary “Mule Tracks: UCM After 150 Years,” and “The Story of Us: A KMOS American Portrait Special.” “Mule Tracks” received a Bronze Winner in Television – History and a Bronze Winner in Television – Writing.  This documentary explored the founding and continuing history of UCM. “The Story of Us” also received Bronze Telly awards in the Categories of Television – Diversity and Inclusion for its role in a national collaboration featuring stories of individuals living with disabilities.

More About the Three Student Projects Honored
“Giving Me Life: Nclusion Plus” is a Bronze Winner in the category Online General – Event. Produced by Cassidy Lesire (sophomore, Digital Media Production major), this is a short documentary about the positive messages and accomplishments of a company that specializes in pop-up entertainment events. It features the company founders, as well as the queens who put on the fabulous shows. Some of the other honorees in this category are KHOU CBS Houston, City of Murfreesboro, Tennessee and The Repertory Theatre of St. Louis.

“Zero Day Threat” is a Bronze Winner in Online – Information. Produced by Paris Norvell (junior, DMP major), this short documentary features Evan Nichols, an information security engineer for one of the largest school districts in the state of Kansas discussing what cyber security is and examples of how it takes place in daily life. Some of the other honorees in this category are Al Jazeera Digital, InvestigateTV and ViacomCBS.

“The Schoolhouse Jammers” is a Silver Winner in Online – Documentary, produced by Tim Oar (senior, DMP major). Since 2003 the Johnson County Historical Society has hosted musical jam sessions which have grown into a thriving community of musicians from multiple backgrounds. Some of the other honorees in this category are The Weather Channel Digital, PBS SoCal and The Olympic Channel.

About KMOS
KMOS is a PBS member television station licensed to the University of Central Missouri. Since 1979 we have broadcast high-quality engaging, educational and entertaining programs to central Missouri. From one original channel broadcast 18 hours a day to four channels broadcast 24/7, KMOS is supported in the community through individual memberships and corporate support, by UCM as well as underlying support from all viewers.

About UCM
The University of Central Missouri transforms students into lifelong learners, dedicated to service, with the knowledge, skills and confidence to succeed and lead in the region, state, nation and world. Our 150-acre main campus is located in Warrensburg, with our extended campus, UCM-Lee’s Summit, located at the Missouri Innovation Campus in Lee’s Summit, Mo. UCM offers 150 programs of baccalaureate and master’s degree study with outstanding, experienced faculty, and opportunity for study around the world.

About the Telly Awards
The Telly Awards was originally founded in 1979 to honor excellence in local, regional and cable television commercials, but added with non-broadcast video and television programming added soon after. The Telly Awards annually showcases the best work created within television and across video, for all screens. Receiving over 12,000 entries from all 50 states and five continents, Telly Award winners represent work from some of the most respected advertising agencies, television stations, production companies and publishers from around the world.