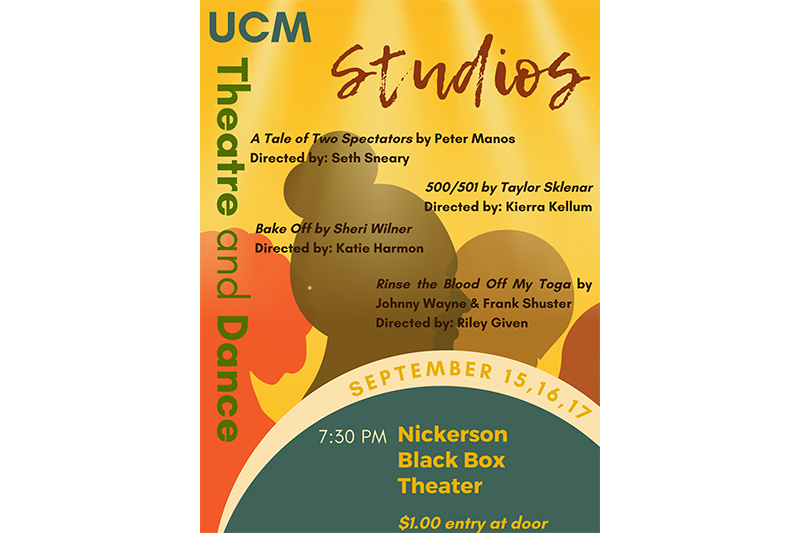 WARRENSBURG, MO – University of Central Missouri Theatre and Dance presents A Night of Studio Theatre One-Acts at 7:30 p.m. Sept. 15, 16, and 17 in the Nickerson Black Box Theatre, located on the first floor of Nickerson Hall. These one-acts are performed, directed, and designed entirely by UCM students. The one-act plays being presented are “A Tale of Two Spectators” by Peter Manos, “Rinse the Blood Off My Toga” by Frank Shuster and Johnny Wayne, “500/501” by Taylor Sklenar, and “Bake Off” by Sheri Wilner.

“A Tale of Two Spectators” is a play that follows two people who have been secretly watching their partners have an affair with each other. The two people, played by Max Brennen and Mackenzie Lewis, have been meeting this way for months and have watched as their partners who have grown more fond of each other. As their relationship blooms, frustration builds among the spectators, and what happens next is a surprise to everyone. “A Tale of Two Spectators” is written by Peter Manos, directed by Seth Sneary, with technical direction by Ansley Walker.

“Rinse the Blood Off My Toga” is a play about the Julius Ceaser murder. Flavius Maximus (Jared Dosch), accompanied by his gladiator, Tiberius (Aiden Walker), must help the man in distress, Brutus (Thomas Clark), solve the Julius Caesar caper. Talking to suspects Calpurnia (Shanna Sinow), Mark Antony (Luke Habjan), and Claudius (Quinn Allen), Flavious discovers the answer might be closer than expected. “Rinse the Blood Off My Toga” is written by Frank Shuster and Johnny Wayne, directed by Riley Given, with technical direction by Owen Hopper.

“500/501,” written by Taylor Sklenar is directed by Kierra Kellum, with technical direction by Tierra Buckner. The story follows a Confined Animal Feeding Operation (CAFO), specifically two very small stalls located there. We watch the life of pigs, 500 (Mary Gladbach) and 501 (Paige Showen), and see them question what lies behind the stall. Eventually a new friendship blooms, but the inevitable comes.

“Bake Off” is set in 1997, the year after a man became the first to win the grand prize. The play presents two contestants side by side. Paul (Ryan Verheek), a divorced man, is competing as an example for his nonathletic son. Rita (Reagan Weber), embittered by years of banishment to the kitchen, is bent on defending the bake-off as a female province. By the end of the competition, Rita finds out there are more men than just Paul entered in the contest…and the Pillsbury Doughboy (Caleb Wands) has to pay the price. “Bake Off” is written by Sheri Wilner, directed by Katie Harmon, with technical direction by Lexi Winterbower.

Tickets are $1 (cash only) and are only available at the door. Due to the size of the space and the limited seating, arriving at least 30 minutes in advance is recommended. Doors will open at 7 p.m. and the show will begin promptly at 7:30 p.m. For additional information, please contact Dr. Aaron Scully at ascully@ucmo.edu.