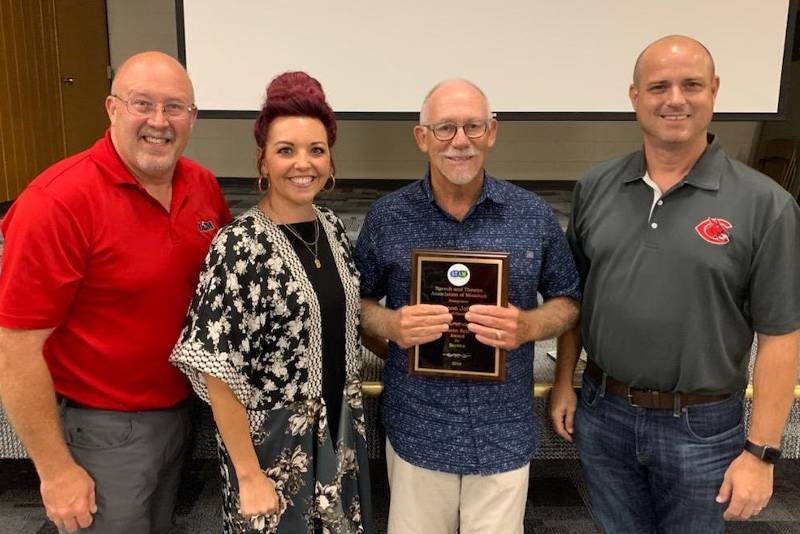 Dr. Richard, Herman, third from left, chair emeritus of University of Central Missouri Theatre and Dance, was honored with the Speech and Theatre Association of Missouri (STAM) Hall of Fame Award during the group’s recent conference. Among those attending the event were, from left,  Instructor of Communication and Digital Media Shannon Johnson; Chair of Theatre and Dance Ashley Miller-Scully,  and Assistant Professor of Theatre Dr. Aaron Scully.

WARRENSBURG, MO – More than 50 faculty members, students, emeriti and alumni from the University of Central Missouri Division of Theatre and Dance and the Department of Communication and Digital Media Production  attended the annual Speech and Theatre Association of Missouri (STAM) conference Sept. 22-24 at the Lake of the Ozarks. In addition to presenting workshops and participating in recruitment events, UCM members were honored in multiple areas of speech and theatre, including Hall of Fame recognition, during the event. The annual conference continues to showcase the strength of UCM programs and their great impact on speech and theatre education in Missouri.

During the event, Lexi Winterbower, a junior seeking a Bachelor of Science in Speech Communication and Theatre, received a $750 STAM scholarship, and was elected to serve as the student representative on the STAM Board of Governors for 2022-23. Winterbower was one of eight UCM BSE in Speech Communication and Theatre students to attend the conference and was elected to this position by fellow students from the university, Missouri State University and Central Methodist University who attended the conference.

Teri Turner, a 2007 BSE in Speech Communication and Theatre alumna who teaches at Grain Valley South Middle School, received a STAM Project grant for an initiative titled “Creating the Nest.” The project goal is to create a positive and inclusive culture at school with student leaders and visuals to promote conversations and action amongst students to combat racist and discriminatory behavior.

Professor and Chair Emeritus of UCM Theatre and Dance, Dr. Richard “Buzz” Herman, was presented the esteemed Hall of Fame Award given annually by STAM. Herman was recognized for his dedication to the art and craft of theatre, with more than 40 years in the profession as a performer, educator, and administrator.

Nominated by his former Theatre and Dance colleagues, Dr. Aaron Scully and Ashley Miller-Scully, their letters to the STAM Awards Committee noted that throughout Herman’s 15 years as chair of UCM’s Department of Theatre and Dance, he took the program to new heights and helped establish it as one of the finest theatre programs in the Midwest. Most notably, he was able to secure funding and a space on campus for a new experimental performance lab in Nickerson Residence Hall. This later became known as the Nickerson Black Box Theatre, home to the Richard Herman Black Box Theatre program, serving as the venue for completely student-produced theatre season each semester.

Under Herman’s leadership, UCM Theatre and Dance achieved National Association of Schools of Theatre (NAST) accreditation in which he was the driving force. As the program grew, he was able to hire additional faculty, which led to the creation of the Bachelor of Fine Arts in Musical Theatre and the Dance Minor.

Among his many accolades and career accomplishments, Herman has received the Kennedy Center American College Theatre Festival (KCACTF) Gold Medallion, Ed See Outstanding Theatre Alumnus Award, UCM Governor’s Award of Excellence in Teaching, UCM Byler Distinguished Faculty Award, and was recognized as one of the Ingram’s Magazine 2015 Icons of Education. STAM also awarded Herman the Wayne Brown Outstanding Teacher Award in 2005, and he served as STAM president from 2006-2007.