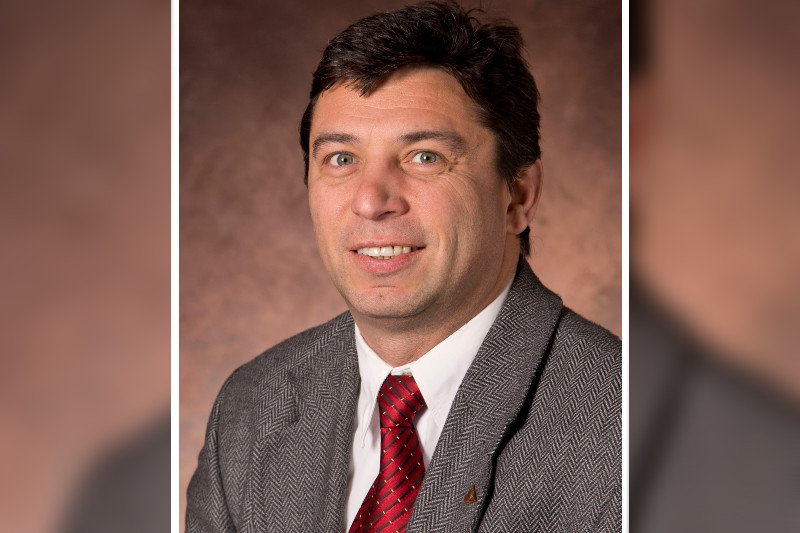 WARRENSBURG, MO – Dr. Georgi Popov, a university of Central Missouri faculty member who has distinguished himself as a professional leader in the reduction of workplace risks, this month was honored by three national organizations dedicated to safety. The National Institute for Occupational Safety and Health (NIOSH), the American Society of Safety Professionals (ASSP) and the National Safety Council (NSC) partnered in the presentation of the second annual Prevention through Design (PtD) Award to Popov.

Popov was honored in a virtual ceremony that took place on Oct. 11 as a way to champion worker safety and health. The PtD annual award recognizes individuals, teams, businesses, and other organizations that have eliminated or reduced hazards through design or re-design efforts or have contributed to the body of knowledge that enables PtD solutions.

“It is a great honor for me to receive this award,” said Popov, who became chair of the Department of Occupational Risk and Safety Sciences at UCM in 2022. “It is a recognition for our occupational risk and safety sciences department and all efforts to develop new methods to advance the protection of workers using Prevention through Design.”

This award signifies the collaborative efforts between Popov and the program advisory board chair. It is only the second PtD award and a continuation of the foundational work performed by longtime occupational safety and health expert Fred A Manuele, who received the first award presented in 2021.

Popov noted the value of PtD in the workplace stating that “PtD is a risk-based standard. It emphasizes the importance of risk assessments early in the design phase and throughout the life-cycle of a system. It also uses a Hierarchy of Risk Treatments to encourage higher levels of controls. It is always more beneficial to prevent occupational, health, and safety risks - instead of trying to mitigate the severity of the undesirable outcome (injuries and illnesses).”

Having a career that includes more than 25 years of experience in the application and instruction of Prevention through Design concepts, occupational risk assessments and risk management, Popov joined UCM in 2006 as an emergency hire for one year teaching Safety Sciences courses. He later became a tenure track professor, and has served as full professor since 2016. In addition to teaching at UCM, he is a leading researcher and a guest speaker in the PtD and risk management field, and has taught thousands of occupational safety and health professionals in PtD and risk assessment. He has developed training modules and course materials and continues to provide in-person and virtual sessions for students across the globe.

To help further his profession, Popov became chair of the ANSI/ASSP Z590.3 Prevention through Design Committee in 2019. Under his leadership and guidance, the PtD standard was revised and published in August 2021. His work has influenced many of the concepts and methods that are incorporated into the new standard.

In the official announcement of the Prevention through Design Award, NIOSH, ASSP, and NSC leaders weighed in on the importance of this recognition. They also noted reasons for Popov’s selection for the prestigious honor.

“One of the best ways to prevent and control occupational injuries, illnesses and fatalities is to ‘design out’ or minimize hazards and risk early on in the life cycle of workplace tools, equipment, processes, and organization,” said NIOSH Director John Howard, M.D.  He added that in honoring all the nominees and recognizing Popov’s years of contribution to the field, “NIOSH hopes to further raise awareness of how useful these prevention methods can be.”

Paul Vincent, executive vice president of workplace practice at NSC, stated, “Few people have done more for the prevention through design field than Dr. Popov. His decades of writing, researching, consulting and teaching helped instill the importance of design into the next generation of safety professionals. That type of ongoing contribution to safety is invaluable.”

“Dr. Popov’s passion for communicating the value of PtD and the business case model he developed is evident in the thousands of occupational safety and health professionals and students who have learned him,” said ASSP Senior Vice President Pam Walaski, CSP, FASSP. “I’m grateful for the opportunity to work with and learn from him over the past decade.”

Popov has received numerous other accolades throughout his career, including being named in 2020 as a Fellow of the American Industrial Hygiene Association (AIHA). Other recognition includes his selection by UCM for the Missouri Governor’s Excellence in Teaching Award in 2009 and the AIHA President’s Award in 2011. Popov is a member of ASSP’s Heart of America Chapter and was recognized as the chapter’s 2015 Safety Professional of the Year (SPY). In 2016, he received the ASSE Region V SPY Award, and the following year was the ASSP Outstanding Safety Educator Award recipient.

Individuals who want to learn more about the Prevention through Design (PtD) Award can do so by visiting the NIOSH website devoted to this recognition program.