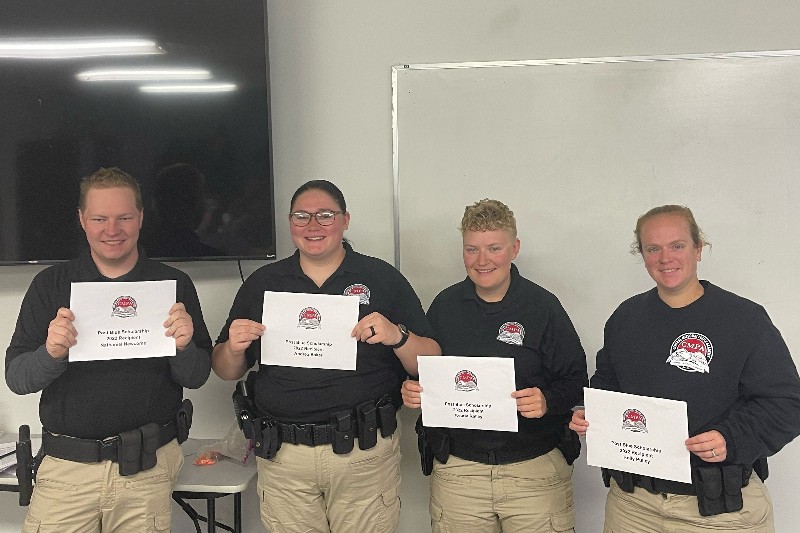 Earlier this fall, Parson announced the launch of this new initiative utilizing $1 million in state support to help attract more Missourians to law enforcement careers and address officer shortages at law enforcement agencies across the state. The Missouri Blue Scholarship is awarded on a first-come, first-serve basis, and pays up to $5,000 toward the cost of a Missouri resident attending a law enforcement academy in the state. CMPA cadets who applied for the program and received awards this fall are Nathaniel Newsome, Warrensburg; Andrea Baker, Warrensburg; Kearia Railey, Richmond; and Holly Pulley, Brunswick.

“These scholarships are an additional way of showing our support and commitment to those who choose to serve, and it comes as many law enforcement agencies are experiencing officer shortages,” the governor added.

Tim Lowry, a retired police officer who serves as director of CMPA, stressed this scholarship program provides an important financial boost to students who are currently enrolled at the academy this semester and is also an incentive for those who may be considering enrollment in 2023 and beyond. While $20,000 in total support has already been awarded to the CMPA, he expects Missouri Blue Scholarship dollars to increase in the months to come as more cadets qualify for funding.

“Missouri is unique in that we have several academies across the state and instead of having police departments pay for cadets to go through the program, typically the cadets who come to the CMPA pay their own way. Then they get hired by a department,” Lowry said.

Lowry said the cost to attend the CMPA is $6,210, which covers 835 hours of training. Most cadets who leave the academy already have jobs waiting for them once they complete the program. This includes cadets who are completing CMPA’s 164th class, which began in July and concludes in December. A couple of the recent scholarship recipients spoke about the value of this scholarship fund and what it means to meeting their career goals.

Railey said she wanted to be a difference maker in her family and in her community by choosing a career in law enforcement.

“This is really important. It helps my family a great deal,” she commented on the scholarship.

Railey noted that when she entered the program in July she received a $1,200 scholarship from CMPA, but was uncertain about how she would pay off the balance. This is no longer a concern as she looks toward a future with the Ray County Sheriff’s Department, where she has already worked for about two years at the jail.

She said CMPA training provided her with more knowledge in areas such as defensive tactics, background on Missouri statutes and more that she needs to know to pursue a career as a police officer. Her ultimate goal is to work on a SWAT team. After about five months of classes, eight hours a day, five days a week, her eyes are on the finish line.

“It can get exhausting, but we are on the home stretch right now,” she said.

Like Railey, Baker received a scholarship from CMPA to begin the program, but she is also juggles coursework and tuition that comes from pursuit of a
Bachelor of Science in Criminal Justice at UCM. Her baccalaureate degree will be conferred during the 2022 Fall Commencement exercises, two days after completing her CMPA training.

“This is super important,” Baker, who grew up in St. Clair, noted about the Missouri Blue Scholarship. “I have incurred debt from college, so this is just one less thing I have to worry about.”

With the shortage of individuals needed to serve in law enforcement, she also won’t have to worry about finding a job. The former St. Clair, Missouri resident, was already in the interview process for a position weeks before her graduation.

“Growing up, I had a lot of interactions with law enforcement and it was always a positive interaction that stuck with me,” she said in talking about her reasons for pursuing a law enforcement career. “Our high school allowed us to do extracurricular online classes, and I took criminology. I knew from that class, this is something I definitely wanted to pursue. That’s also why I came to UCM because they have an outstanding criminal justice program.”

The CMPA is part of the Missouri Safety Center at UCM, which is housed in the Harmon College of Business and Professional Studies. Individuals who want to know more about the Missouri Blue Scholarship and opportunities at the academy are encouraged to contact Lowry at tlowry@ucmo.edu or 660-543-4090. Additional information about the scholarship is available at dps.mo.gov by clicking on the “Missouri Blue Scholarship” under Popular Links. For questions call 573-526-2765.