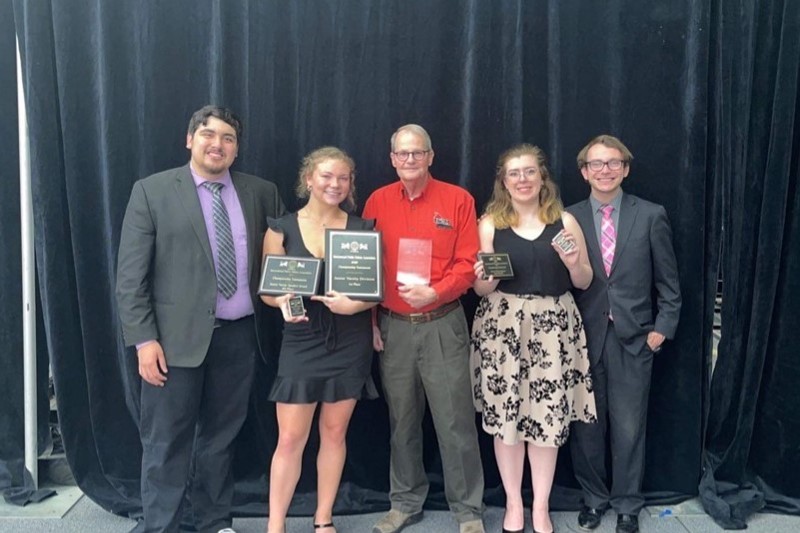 WARRENSBURG, MO – While two members of the University of Central Missouri’s Talking Mules speech and debate team contributed to honors that included a national championship, the exceptional work of their coach over many years in his field led to Hall of Fame recognition during the recent International Public Debate Association’s National Championship Tournament and Convention. The four-day event, April 8-11, was hosted by Abilene Christian University, and included nearly 350 debate competitors representing 45 different public and private colleges and universities across the nation.

Lillian “Lilly” Rhodes, a UCM sophomore political science major from Raytown, captured the national championship in the Junior Varsity Division, and Ryann Hill, a junior elementary education major from Kansas City, made the quarterfinals, or what is considered the Elite 8, in that same division. Adding to an impressive trip to Abilene, Texas, Jack Rogers, Ph.D., a professor of communication at UCM who has dedicated many years of his professional career working with speech and debate students, became one of the first individuals to be inducted into the new IPDA Hall of Fame. He and his student competitors were also joined at the tournament by graduate assistants Manuel Reyes and Evan Kirksey, who help coach the team.

Rogers said he was” thrilled” about the students’ success. He noted that members of the Talking Mules not only got to compete in individual events, but they also took part in two-person team  competition This  made UCM one of a small number of universities that qualified for both team and individual events at the IPDA.

“There’s a lot of hard work in it and a lot of preparation,” Rogers said in talking about the opportunity to compete in the IPDA event. “But once you get to the tournament, you’ve got to be lucky as well as good because each round the topic changes, and each round you get a different set of judges and different opponents. So a lot of it kind of depends on the luck of the draw in some ways… that you will get a topic you know something about.”

The Talking Mules’ coach enjoyed watching UCM students and the competitive spirit that they brought to each round of competition, culminating with Rhodes’ division championship.

“Once Lilly got in the quarterfinals, she never looked back. She’s a very strong competitor, and a very confident young lady,” Rogers said.

According to the IPDA website, the organization’s mission, through such competitive events, is “to provide an opportunity for individuals to develop their advocacy skills in a form that promotes appropriate and effective communication.” The tournament included the Novice Division, which was for competitors with little or no experience; a Junior Varsity Division for individuals with an intermediate level of experience, either as former high school competitors, or experience gained through collegiate competition; a Varsity Division for more skilled and experience debaters; and a Professional Division, which is accessible to collegiate alumni, community members and others who want to continue with competitive debating long after their collegiate experience.

Rogers, who is internationally known in college debate circles, knows something about IDPA, the rigor of competition, and the opportunities it provides. He co-founded the organization 25 years ago with Alan Cirlin, then a professor of communication at St. Mary’s University in San Antonio, Texas.

This year, when the IPDA’s governing board and its executive committee established the International Public Debate Association Hall of Fame, they honored both Cirlin (posthumously) and Rogers. The ceremony celebrating their induction as the first individuals named to the Hall of Fame took place in Abilene.

“It was really fun and a surprise, I didn’t know it was coming,” Roger said. “To get the national championship and to be inducted into the new Hall of Fame was quite exciting.”

Recognition for Rogers came on the heels of another prestigious honor he received this spring from UCM. In March, he was named recipient of the Byler Distinguished Faculty Award. The top honor presented to the university’s faculty recognized his many years of work as a university educator, and included recognition for decades of service supporting speech and debate activities and students at UCM, throughout the state, nation, and abroad.