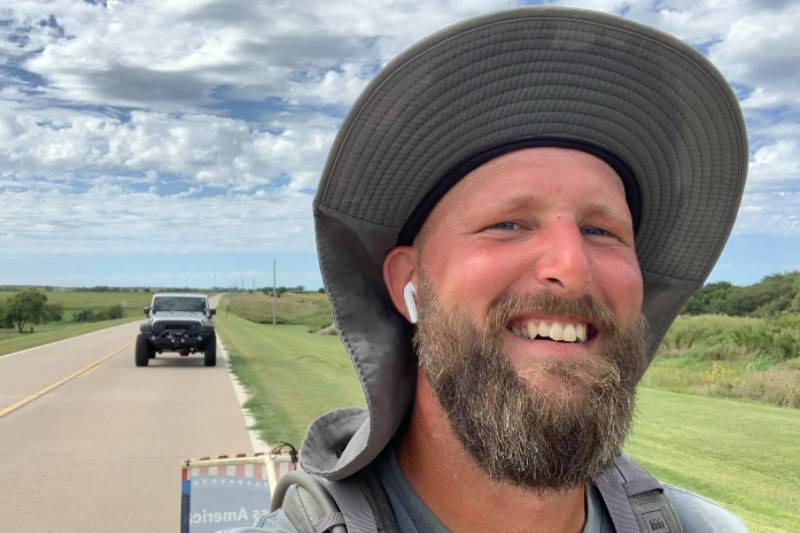 U.S. Army veteran Jeremy Miller will take time out from his Walk Across America for Veteran Suicide to meet with veterans who are attending the University of Central Missouri during a stop on campus Thursday, Oct. 3. He will be at the university’s Military and Veterans Success Center in the Elliott Student Union at 9;30 a.m. His arrival on campus is part of a visit to the Warrensburg community that began on Tuesday, Oct. 1, and includes opportunities to visit with local members of the VFW, American Legion, Warrensburg Chamber of Commerce, and area first responders.

An Idaho native who served in Iraq during his eight years of military service, Miller arrived in the Kansas City area recently as part of his walk from coast to coast that began in Crescent City, California, May 21. As he covers some 3,200 miles on foot, he hopes to raise awareness of mental health issues and how they have contributed to suicide among the many men and women who have served this nation. Military veterans are encouraged to visit with him while he is on campus, but others who have an interest in what he is doing to draw attention to veteran suicide are welcome to come meet him as well.

Miller plans to conclude his walk after reaching Arlington National Cemetery in Virginia. Individuals can learn more about Miller’s journey by checking out Walk Across America on Facebook or @exploringislife22 on Instagram.