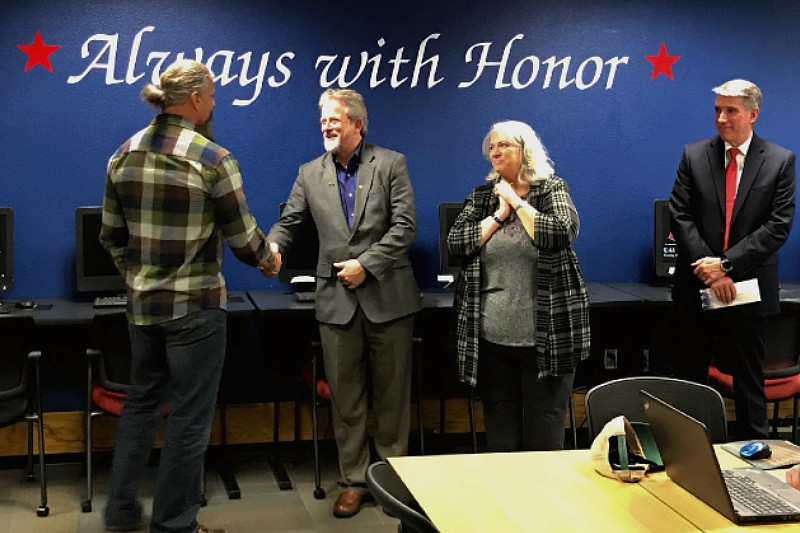 Kelly Murphy, left, director of Military and Veteran Services at the University of Central Missouri, thanks Dale and Megan Duncan, Olathe, Kansas, after a $7,500 check presentation to Roger Best, UCM president, from the Spencer C. Duncan Make It Count Foundation. It will help UCM veterans with their education.

WARRENSBURG, MO – On Aug. 6, 2011, Olathe, Kansas, residents Dale and Megan Duncan responded to a ring at their front door only to receive the worst news parents could ever hear. Their son, Spencer, was one of 30 United States service members who lost their lives when the Chinook helicopter that transported them into duty was shot down during a mission in Afghanistan.

Word of the incident spread quickly. What would have been a calm Saturday was interrupted by media flocking to the family’s home to cover the story about Spencer, and what is still the largest single-day loss of American lives in Afghanistan. On that day, the Duncans knew their lives were forever changed, and their desire to honor their son’s memory since has changed the lives of many veterans, including those attending the University of Central Missouri.

“We had a choice. We could just curl up into each other in grief and go on … and that was tempting. Or, we could do something,” Dale Duncan said. “We knew that Spencer would want us to do something. We knew that if he came home he would be the first in line to try to help other veterans, so that’s what we decided to do.”

The couple’s desire to help as many veterans as they can earn a higher education degree recently led to a $7,500 gift to UCM from the Spencer C. Duncan Make It Count Foundation. The Duncans stopped by the Military and Veterans Success Center in early December to present the check to UCM President Roger Best, with members of Military and Veteran Services and the UCM Alumni Foundation also in attendance. This is the third consecutive year the Duncan family has made a gift to the university through the foundation they established in memory of their son. Funds provide scholarships to help veterans offset the cost of their books and tuition.

In making the presentation, the Duncans shared Spencer’s story and talked about why they have chosen UCM as one of a small number of institutions that receive support for their students.

“We wanted to find institutions that were extremely veteran engaging. We are really doing things to help veterans who are coming back to try to reintegrate into education,” Dale Duncan said. “That was one of our goals as a foundation. We did some research and connected to UCM, and found it to be extremely veteran engaging, so we set up book and tuition scholarships here. We’ve been able to do this for three years, and it’s been an amazing partnership.”

During his presentation, Dale Duncan recalled that Spencer expressed his interest in serving his country in the sixth grade when he saw video of the World Trade Center bombings on Sept. 11, 2001. After returning home from school that day, he said to his mother, “This is kind of like the bully bringing the fight into our backyard … We need people who are not going to let that happen, and I’m not going to let that happen.”

Maintaining that passion for his country and the freedoms its citizens enjoy, Spencer joined the Army after graduating from high school, and his training gave him the skills he needed to repair military aircraft as part of the U.S. Army’s 7/158th Aviation Regiment. His desire to become part of the flight crew later led to him becoming a door gunner, a position he held at the time he was killed in action.

Established eight years ago, the Spencer C. Duncan Make It Count Foundation began with a 5K run in Kansas City, which was made possible through the support of about 100 volunteers and 535 participants who raised approximately $27,000. The annual run today draws more than 1,200 participants and has contributed since its inception to a foundation that has provided about $600,000 to organizations and individuals working to honor and assist the nation’s veterans.

“Investing in veterans is investing in everybody because I have not met a veteran yet who doesn’t turn around and help another veteran,” Megan Duncan said. “If you change one person’s life, you’re going to change another person’s life just from the trickle-down effect – that’s just the way it works. And to be part of this effort that really changes lives – not a moment, but forever – there’s no better way to honor our son.”

Among those taking part in the check presentation was Kelly Murphy, who is the director of Military and Veteran Services at UCM and a retired U.S. Marine. He participated in the Make It Count 5K run in summer 2019 to honor his friends who died in action.

“It was humbling to see so many people come together to support a worthy cause,” Murphy said. “Shortly after the event, I was able to award the scholarship for the first time to one of our veterans who greatly benefited from it. It took a lot of stress out of his life to be able to graduate debt free.”

Learn more about opportunities for veterans at UCM on our website. For more information about the Spencer C. Duncan Make It Count Foundation, go to makeitcounttoday.org.