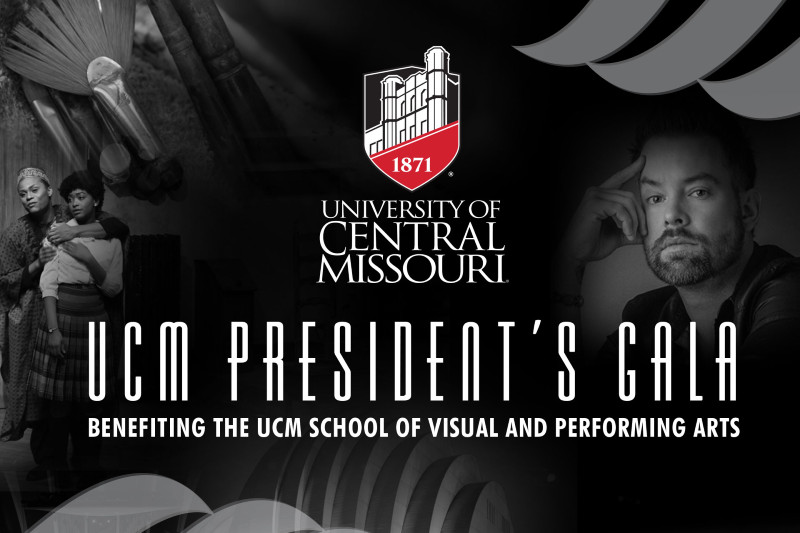 WARRENSBURG, MO – Showcasing the University of Central Missouri’s talented faculty and students in the School of Visual and Performing Arts, the university presents the President’s Gala from 7 to 9 p.m. March 30, 2020, at Kansas City’s Kauffman Center for the Performing Arts.

The President’s Gala is set in beautiful Helzberg Hall and celebrates all of the school’s areas of study -Art and Design, Music, and Theatre and Dance, with this year’s theme, “The Arts Are the Future.” One of UCM’s most famous alumni, singer-songwriter David Cook, will join in this evening of entertainment and enlightenment for the arts. The 2006 graduate’s career skyrocketed when he won the nationally televised “American Idol” competition in 2008, and he has since gone on to pursue a professional career that includes a platinum album and performances on Broadway stages. During the gala, Cook will perform a couple of his Billboard Hot 100 singles, as well as a finale collaboration with the UCM Wind Ensemble, Concert Choir and other music students. Bryan Busby, chief meteorologist for KMBC-TV 9 News, also joins in the event as the gala emcee.

UCM President Roger J. Best, Ph.D., has revived the gala as an opportunity to not only showcase the work of university students and faculty, but also to raise funds to extend the educational benefits of the School of Visual and Performing Arts. The school is part of the College of Arts, Humanities, and Social Sciences, under the leadership of Dean Michael Sawyer, who is confident that the event “will ignite a passion for the arts” in those who attend.

The President’s Gala is free and open to the public, but reservations are required. Tickets are available at ucmo.edu/gala. In the spirit of the gala’s theme, anyone who is inspired to make a contribution supporting the future of the arts at UCM can become a gala sponsor or donate by visiting ucmo.edu/gala.

Sawyer said gifts will help build upon many current successes in the School of Visual and Performing Arts, including national accreditation; maintaining programs that prepare more music educators than any other Missouri institution; achieving special designations such as an All-Steinway School to help attract more students; support for award-winning students who will go on to earn acclaim at events such as the Kennedy Center American College Theater Festival; and much more.