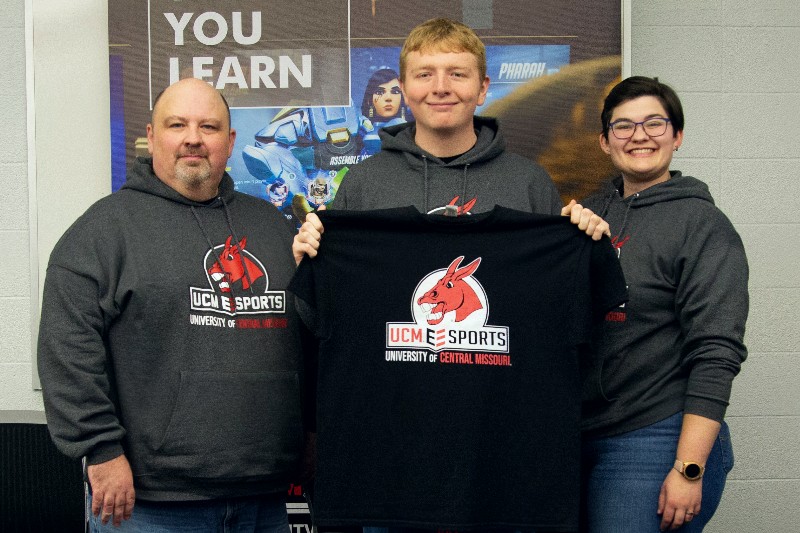 Cody Bruckerhoff, center, a sophomore computer science-game development major from Hermann, Missouri, has been recognized as the Shoutcaster of the Year by the National Association of College Esports (NACE). In 2019, he received a scholarship to participate in the University of Central Missouri’s esports team during the spring 2020 semester. He is shown with Steven Shattuck, left, an assistant professor of mathematics who started UCM Esports, and Rachel Cornell, the esports Overwatch team coach.

WARRENSBURG, MO – What announcer Al Michaels is to pro football and Bob Costas is to baseball, Cody Bruckerhoff may be to college-level Esports. As a student member of the University of Central Missouri’s new Esports team, he has received the Collegiate Shoutcaster of the Year Award for 2019-2020 presented by the National Association of College Esports (NACE).

A sophomore computer science game-development major from Hermann, Missouri, Bruckerhoff was honored in July by NACE. He was part of the first class of national award winners for the association, which recognized outstanding students and staff at NACE-member institutions.

Bruckerhoff’s recognition came in one of 15 different award categories. In addition to Shoutcaster of the Year, NACE honored outstanding coaches in the Overwatch, Rocket League, League of Legends, Counter-Strike: Global Offensive and Fortnite games; men’s and women’s student leaders; an outstanding program director; top collegiate broadcaster; and the NACE All-Star Team, which included members from each of the six different game categories.

A shoutcaster is an individual who does commentary during the live streaming of a video game. They not only have a great knowledge of the game, but have the ability to inform and entertain viewers who are watching the broadcast.

Bruckerhoff was one of 27 UCM students selected for UCM Esports for the spring 2020 semester, and was awarded a $500 scholarship for his participation. He is part of a team that was organized and launched in fall 2019 by Steven Shattuck, assistant professor in the School of Computer Science and Mathematics.

“Cody is an amazing computer science student and great team member on our UCM Esports team, Shattuck said. "Being recognized nationally in our first year as a team is a huge honor. It reinforces that we are doing something right. It also gives us added momentum for our second year as a competitive collegiate esports team."

UCM was the second public university in Missouri to create its own esports team. Esports provides an opportunity for competitive, organized electronic gaming involving individuals who play the same popular games that they enjoy on their home systems. Competitions involving programs such as Overwatch, League of Legends and Rocket League can take place on campus, but at the highest level, this could mean arena-style play where participants can be watched in action via a streaming video service such as Twitch.

Similar to collegiate sports teams, which follow guidelines established by a member-led organization such as the National Collegiate Athletic Association (NCAA), esports also has its own organization to champion its growth and development on college campuses. With more than 100 participating schools, this group is the National Association of College Esports (NACE), headquartered in Kansas City, Missouri.

Individuals who want to know more about Esports at UCM, including the recruitment process, are encouraged to contact Shattuck at ucmesports@ucmo.edu.