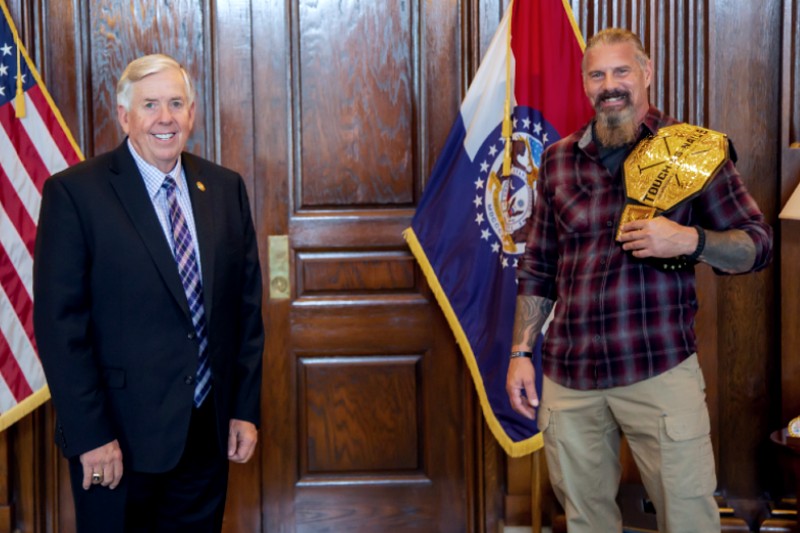 WARRENSBURG, MO – On a short walk toward the Missouri capitol, Kelly Murphy joked about trying to decide what he should wear on a visit with legislators. The decision was an easy one for the humble, soft-spoken man with a tall, chiseled frame. Instead of a suit, he stuck with the casual look that friends and co-workers at the University of Central Missouri, and now a growing number of fans, recognize thanks to him being the first-ever winner of the summer hit CBS series, “Tough as Nails.”

Murphy, who serves as director of Military and Veterans Services at UCM, was invited to the capitol on Sept. 16, an event that was coordinated by Representative Dan Houx, R-District 54. He was joined in Jefferson City by his son, Garrett, a junior at Warrensburg High School; Roger Best, UCM president; and David Pearce, UCM’s executive director for governmental relations.

“I’ve always been supportive of the university and the veterans center,” said Houx, “and this is an opportunity to recognize one of our veterans at UCM for his service.”

Carrying with him a large, black leather and gold-plated belt he received as the “Tough as Nails” winner, Murphy’s visit to the capitol began with a stop at Gov. Mike Parson’s office, where the governor greeted him and other guests. After asking the group a number of questions that included Murphy’s work with the military, Parson thanked Murphy for his service as a retired U.S. Marine. The governor also presented a “challenge coin” to Murphy and a couple of other veterans who were in the room.

From the Governor’s office, Murphy visited the House of Representatives. He received a resolution signed by Houx, welcoming “the opportunity to recognize a remarkable Missourian whose efforts and accomplishments have made him a source of inspiration to all of those around him.”

Murphy appeared on the House Chamber dais and was recognized by legislators as they were about to begin a veto session that afternoon. Later in the day, he was recognized by the Missouri Senate, where both he and his son were seated on each side of the chamber dais. He also met with Senator Denny Hoskins, R-District 21, who presented a resolution he signed in recognition of his achievements spanning from Murphy’s service in the military to his work at the university to winning “Tough as Nails.”

Throughout the day, Murphy stopped and posed for photos with people in the capitol building who recognized him or with those with whom he was introduced. Among them was Lt. Gov. Mike Kehoe who stopped to visit on an encounter in a hallway.

“It was just a neat experience to share with other people from the state,” Murphy said in commenting about the opportunity to meet and visit with state legislators. “It’s neat to be able to share it with Garrett. He’s a junior in high school, so for him to be able come up here and to meet the Governor and the Lt. Governor and see the processes and to be able sit up front…it’s just fun to share this moment with him.”

Murphy captured the “Tough as Nails” title before a nationwide viewing audience who saw the program’s two-hour season finale on CBS Sept. 2, 2020.

Known as “Murph” to his competitors, he is from Paragon, Indiana, and also has two daughters, one of whom has joined the U.S. Navy. When he was 18 years old, Murphy left home for U.S. Marine Corps Recruit Training, and went on to serve in the military for 22 years prior to his retirement in June 2012. During his final year in the service, he was a Senior Marine who was deployed with 210 other Marines who safely returned home after fulfilling a mission overseas.

As director of Military and Veterans Services since July 1, 2019, Murphy oversees a campus unit that is dedicated to meeting the education needs of active duty military personnel, veterans and their families. His work is an instrumental part of an office that helps many veterans to make the transition to civilian life, while also providing support for active duty military and veterans who want to apply their federal military benefits toward their college education. He is also involved in working with veteran and non-veteran students in various service projects throughout the Warrensburg community.

As someone who has had an interest in physical and mental fitness for many years, Murphy said he was contacted by a representative of Discovery Channel who had seen images of his physical workouts posted on Instagram. That interest led to him being cast on “Tough as Nails,” which began airing for the first time in early July 2020.

“Tough as Nails” is a competitive program that celebrates Americans who dedicate long hours, and often work under tough physical conditions to perform real-world jobs that are needed to keep the country running. The show began with 12 participants who tested their strength, precision, team-building skills and mental toughness in each weekly episode, often performing work they had never done themselves. The competitions were divided into both team and individual challenges. Murphy was the only remaining member of his team, Savage Crew, that was still in contention for a possible win during the airing of the final episode, which came down to him against four other competitors.

Entering the grueling final leg of the nationally televised competition, Murphy sledgehammered his way through a wall, stacked hay bales, untangled a heap of twisted metal chain, pounded stakes into big blocks of wood, and sawed thick boards needed to build steps to reach the top of a platform. At 47 years old, Murphy, the oldest among the final competitors, outpaced a professional drywall hanger 15 years his junior and a forestry technician to claim a $200,000 grand prize, a new Ford pickup, and the title, “Tough as Nails.”

“I’ve never realty watched reality shows, but I was glad I was asked and I’m glad I participated on the show,” Murphy said, reflecting on his success on the program. The brief series took a month to film, with the competitors working 12 to 15 hours a day, six days a week.

On the show, Murphy often wore a flannel shirt, which has become almost a trademark among those who know him, but he also was often seen wearing a UCM t-shirt during the program. He said he appreciated the opportunity to help promote the university, but also help acknowledge the many blue-collar workers who have an essential role in serving the nation through their work.

Additionally, it was an opportunity to demonstrate that the “veteran community can still serve long after their time in the military.”

Being on “Tough as Nails” has made Murphy much more visible outside the campus and local community with strangers often stopping him and asking questions about the show. He said it has led to invitations to help out with veterans’ projects and to speak with different groups which include Zoom conversations with fourth graders and much older students about topics such as leadership, communication and teamwork.

Murphy is entertaining several professional opportunities that emerged after his victory. This includes being approached by Universal Studios to serve as a military adviser on an upcoming movie, and a clothing company about participating in an advertising campaign.

While not everyone can win a national competition on a reality show, Murphy said he took away from the experience lessons in the value of communication and patience, which anyone can use to help them overcome personal differences with others and help them through a challenging situation.