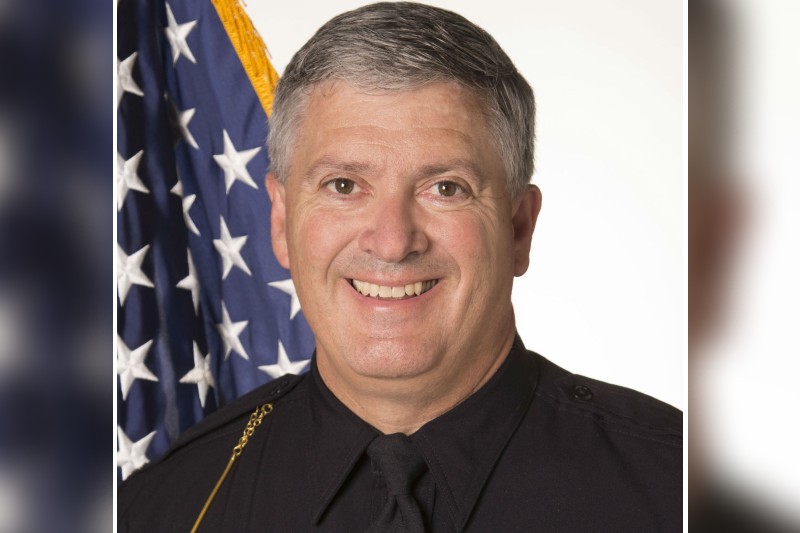 WARRENSBURG, MO – An honor that has been bestowed on individuals ranging from university members to state and national government leaders, Scott Rhoad, director of public safety at the University of Central Missouri, has received the James C. Kirkpatrick Excellence in Governance Award.

Rhoad, who was recognized by the Student Government Association in a ceremony Oct. 7, became the 35th person to be recognized. The award was established in 1985 in honor of James C. Kirkpatrick’s many years of public service. Kirkpatrick was a UCM alumnus who spent 20 years as Missouri Secretary of State, and was a longtime member of the university’s governing board. Recognition in his name is given annually to an individual who promotes the public interest, practices good governmental procedures and has shown loyalty to the university. The recipient is student nominated and selected by members of the SGA.

The Kirkpatrick Award has traditionally been presented each spring at UCM. Due to issues related to the pandemic, the SGA postponed the award presentation until this month.

“To be nominated by a student and then have SGA vote for me to be the recipient of the James C. Kirkpatrick Excellence in Governance Award is an honor that I could have never imagined,” Rhoad said. “I look at the list of previous recipients of the award and I am very thankful to be considered in such high regard by the students at UCM.”

"Chief Rhoad is an excellent choice for the SGA Excellence in Governance Award and exemplifies the type of person this recognition was created to honor,” said UCM President Roger Best, who participated in the award presentation. “We are glad to have him as an alumnus and appreciate his many years of service to UCM. His service has had a global impact, but none greater than that on his alma mater."

As UCM’s Director of Public Safety since May 2014, Rhoad has shown leadership in helping to maintain a safe campus for the past six years, but his dedication to the university and its students extends much further, as does his role as a public servant. He began working for the Department of Public Safety as a student employee in fall 1985 as part of the original Mule patrol, now known as the SAFE Team. He was hired as a full-time police officer in 1987, and was promoted to Sergeant in 1991. He became Parking Services Sergeant in 2000, and Assistant Director of Public Safety in 2012, his last UCM position prior to his current post.

Rhoad is a UCM alumnus having earned bachelor’s and master’s degrees in criminal justice administration from the university, which helped him prepare for his public safety role. This is in addition to training through the FBI National Academy and his involvement in 2007 with the FBI LEEDS (Law Enforcement Executive Development Association).

Since joining the university full time, he has served on numerous executive boards including the Missouri Peace Officers Association, Midwest Campus Parking Association, and the Kansas/Western Missouri chapter of the FBI National Academy Associates. In 2016 he was elected to the FBI National Academy Associates (FBINAA) Executive Board to serve the worldwide membership of more than 16,000 individuals. For the past four years he has represented 15 Midwest states as well as Africa and Middle East nations. After serving as the Section II representative and traveling throughout the U.S. and several countries in Africa, he was recently sworn in as the 3rd Vice President of the FBINAA Executive Board.

A resident of Higginsville, Rhoad has been active in community public service as a member of the city’s Board of Aldermen since 2005.