University News | Board of Governors | awards 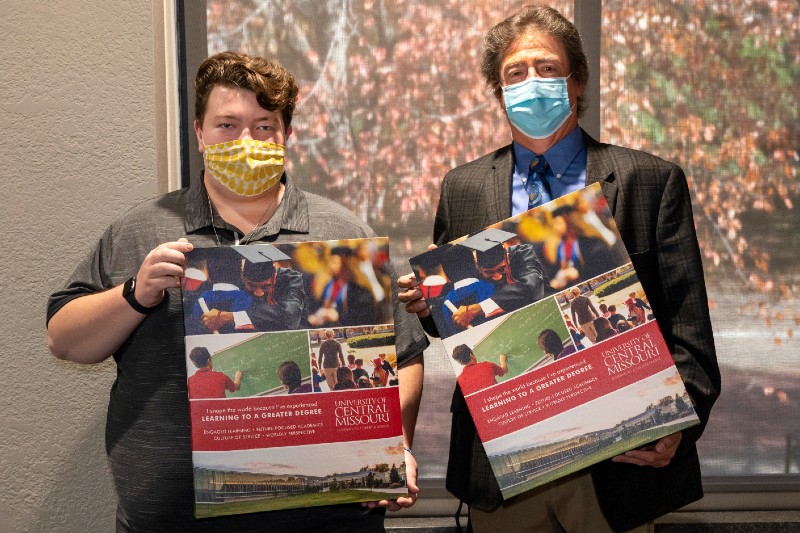 WARRENSBURG, MO – Setting an example for others to emulate, Ken Bias professor and coordinator of the physical education program, and Richard (Joey) Carter, a junior music education major from Blue Springs, Missouri, were recognized as recipients of the University of Central Missouri’s Learning to a Greater Degree Award (LTAGD) Award when the Board of Governors met on campus Oct. 22.

Learning to a Greater Degree conveys the essence of UCM as an institution which promises students the opportunity to experience engaged learning, future-focused academics, a worldly perspective and a culture of service. Members of the UCM community who are nominated for LTAGD awards support these reasons to believe and give life to these promises. Individuals recognized are honored publicly by the governing board and have their names added to a plaque displayed in the lobby of the Administration Building.

Susan Smedley, vice president for Integrated Marketing and Communications, announced the award winners and provided information during the board meeting about why these recipients were selected. One award is presented each semester to both a faculty member and a student, but due to the pandemic, the 2020 spring semester awards presentation initially set for April was postponed until this semester.

Bias was nominated by a fellow faculty member, and is an excellent example of demonstrated engaged learning, and future-focused academics, while promoting a culture of service, Smedley said. He is committed to providing future-focused and engaging learning opportunities for students so they can become successful educators and coaches.

As program coordinator, he has developed two additional options for the PE major in order to better meet the needs of UCM’s undergraduate students. He has taken the lead in launching an additional emphasis option to the online master's degree program, and is focused on improving the student experience.

The nomination letter for Bias notes, “There is rarely a week that goes by he is not pitching a new and innovative idea about how to keep our programs current in best-practice and relevant in our field.”

Bias tries new strategies and new technologies to increase student interest and engagement, Smedley said. He includes various impactful experiences to his students so they are prepared for the challenges they will face as educators. One example is his “wheel-chair” simulation in his Adapted Physical Education class. This simulation aims to provide perspective to able-bodied students concerning individuals with physical exceptionalities. The all-day simulation has a strong impact on students and is something they often refer back to when reflecting on their time in his class.

His nominator stated that Bias “is a great leader and a wonderful mentor. As a junior faculty member, I have learned so much from him through his words and his actions. He has great rapport with students and genuinely cares about each person who walks through his door, which is inevitably always open. To put it simply, he fully exemplifies UCM's four reasons to believe.”

A graduate of Blue Springs South High School, Carter is committed to engaged learning and a culture of service, and is well-known for helping out others. He is often called upon to play as an accompanist in other students' music recitals. He is also “talented and versatile and is able to take on whatever instrument may be needed,” Smedley said.

Carter is a student worker in UCM Music and the individual who nominated him stated he has been an immense help with her transition into the department. She states that he is a dedicated student with a wonderful disposition. Carter takes on tasks no matter how big or small. He has taken his learning outside of the classroom by adding hands-on experiences. He worked as the marching band assistant for the Pleasant Hill marching band this academic year, participated in the pit orchestra for the “Hairspray” musical at UCM, is a member of the symphonic band, and worked with music faculty to create original music arrangements for the President’s Gala and other concerts and recitals. Carter aspires to become a band director in a school district, or work with students teaching the love of music and learning.

Carter’s nominator stated he “embraces all people with whom he comes in contact. He encourages others to excel and expand their abilities. He is an enthusiastic supporter of all...He is one of the nicest, kindest, most giving people; liked and respected by all who know him.”

Find out more about this award and how a UCM education allows students to experience learning to a greater degree by visiting ucmo.edu/ltagd.