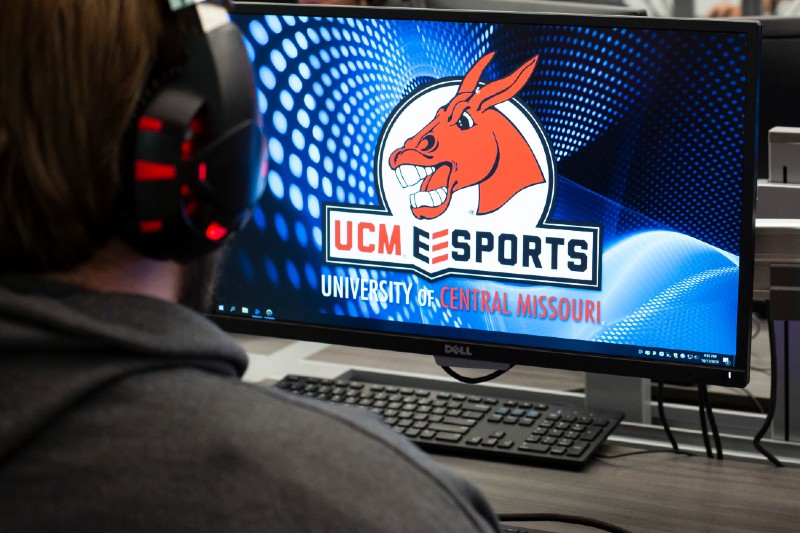 WARRENSBURG, MO – While the University of Central Missouri houses many collegiate sports teams that are part of NCAA-Division II, very recently the school added a new type of sport to their line-up, esports. Part of the National Association of Collegiate Esports (NACE), UCM Esports began in the fall 2019 with team members playing other competitive college-level teams in games such as Overwatch, League of Legends and Rocket League. In the fall 2020 season, UCM Esports added Rainbow Six Siege, NBA2K, Super Smash Brothers and Valorant to their line-up of games.

“We are going big. The first semester was just one game, Overwatch, with just 15 participants. Now we are at over 40 with six different games. Within two semesters we have tripled our growth, it has been growing like crazy,” said Jared Clapp, team captain and junior software engineering major.

UCM Esports was launched with the goal of enabling students to participate in the growing and expansive world of competitive gaming and esports. Over the past few years, esports has grown nationally and has quickly become a mainstream sport with networks such as ESPN providing coverage of professional gaming events. The rise of esports is, of course, due to the popularity of competitive gaming but also because of the profitability; esports events are of relatively low cost to sponsors while bringing in large audiences.

This growth has very recently been seen on the college level with other large schools such as the University of Missouri and Ohio State launching their own esports teams and participating in tournaments. UCM was among the pioneers in this competitive genre, being the second public university in Missouri to create its own esports team.

“As far as organizations go, I think it has the biggest potential to be huge for UCM, esports has been a growing industry the past few years. It has been showing great growth without any signs of slowing down,” said Cody Bruckerhoff, an award-winning shout caster, member of UCM’s Rainbow Six team and junior computer science in game development major. “Even with events like COVID going on, esports were able to keep growing unlike other sports because a lot of it can be done virtually. If UCM gives the right care and attention to esports that we need, we can draw in a lot of students and keep them involved, not only on campus but academically.”

Esports stands out among the other types of college sports, with many differences between gaming and traditional sports. With esports, the “biggest difference is instead of playing on a court or a field, you are in a room with a computer but the intensity is still the same if not more,” said Kordell Ballard, media promotions director for UCM Esports, “There is a lot of mental concentration on what you need to do, when to use certain abilities, when to use certain credits to purchase abilities, when to flank and so on. There is a lot of planning and thinking to it.”

Competitive gaming is unique and it provides players a new perspective over games they enjoy playing. Esports athletes must learn the nuances of the game they play while staying up to date with game updates and strategy changes, a habit that is especially important for esports leadership.

“A coach is many things, a teacher, a mentor, sometimes a friend, but they are first and foremost a leader. It is their job to lead the team to win, to help push the team to improve not just in their gameplay through reviews and strategy sessions, but also in their academic career on campus,” said Lucas Ballard, Overwatch team coach and player. “If a player is struggling, they should know that their coach is there for them and that they will do whatever they can to support them. Game knowledge is important, but it is much easier to learn a game than it is to learn how to lead to win both on and off the battlefield.”

Despite occupying a digital medium, players insist being a UCM Esports team member is a great place to develop friendships much like other sports and organizations on campus, according to Michael Okuly, UCM Esports team captain and junior software engineering major. As he put it, “Everybody on the team is friends. Some of us didn’t know each other but by the end of the year, we all got to know each other. There is a lot of camaraderie between all the players and it is really well run,” he added, “Steve Shattuck, the head of UCM Esports, does a great job. Kordell handles a lot of the media production and does that really well. Everyone on the team works together toward the same goal of raising money for the university and win some games.”

Trevor Rabe, a junior marketing major and NBA2K team member, echoed this sentiment while expressing his appreciation for competitive gaming.

“I started playing NBA2K around when NBA2K9 was released. I just fell in love with the game and every game since. [NBA2k] is different in a way, but it is still fun and competitive. I would say NBA2k is the most fun game I have ever played, I would say, if you like basketball, especially during COVID, it’s for you.

[When I play competitively] I do a lot of setting changes, switching matchups around and watching out for the different zones depending on what team I pick.”

UCM Esports is a certified member of NACE, which provides opportunities for UCM and other colleges to participate in tournaments and games sponsored by the non-profit organization. NACE is responsible for over 5,000 college athletes and has provided over $16 million in scholarships and assistance nationwide. UCM Esports also participates in other independent tournaments or tournaments sponsored by other collegiate esports organizations. The world of collegiate esports is very fast-paced, with many tournaments beginning with only a few weeks notice, or in some cases – only days for teams to sign up.

Members of UCM Esports have been involved in more than just tournaments and games. Team members have participated in player signing events, popup events, weekend events and community outreach activities such as partnering with Culver’s restaurant to host a fundraising event.

While UCM Esports seeks to provide valuable service to the campus and the Warrensburg community, the team also strives to better the heart of the organization itself by being accessible for students and team members alike. Students who want to show team spirit but may not resonate with traditional sporting events can seek UCM Esports as an option for showing their school spirit.

“I personally think it gives [team members] a reason to stay in school, that has always been my angle since day one. This gives students who really do love to game a reason to be a part of the campus community,” Head Coach Steven Shattuck said. “I want them to feel like they have friends and a group of players that they can be with while doing what they enjoy. I hope to do some research for retention of esports; how esports [positively] affects your probability of graduating. I have done some research already and many universities do agree with that.”

Students wanting to join UCM Esports must meet a minimum of a 3.0 GPA requirement and must fill out an application to join the team. Upon passing a tryout and successfully joining the team, students receive a scholarship. According to Shattuck, UCM Esports prides itself on its compatibility with the academic aspect of student life. The team ensures its members continuously meet the GPA requirement for the team and is flexible in its scheduling for practice and meetings.

“As long as I am in charge, it will always be that way, I do not want to lessen those standards,” Shattuck said.

UCM Esports can be viewed on YouTube or live on Twitch.