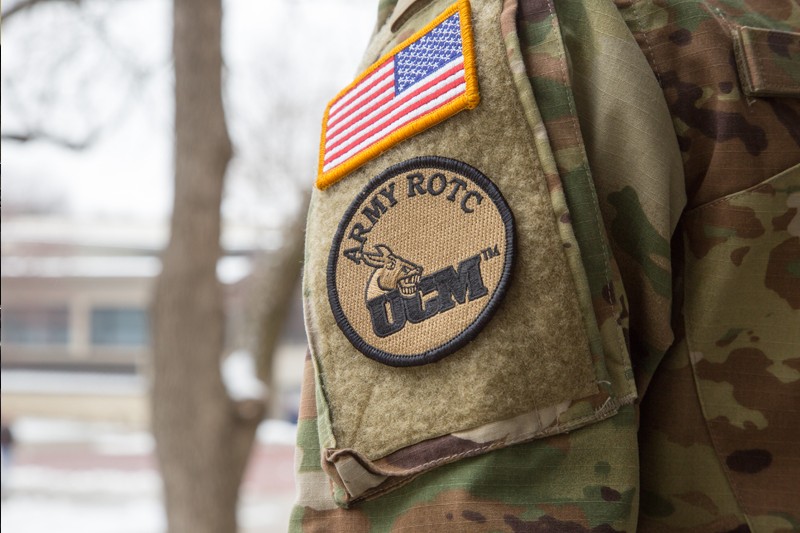 WARRENSBURG, MO – A focus on excellence has contributed to a successful Army ROTC program at the University of Central Missouri, recently evident by the Fighting Mules Battalion earning top-three honors in three award categories among battalions across a nine-state region.

Housed within the university’s School of Public Services, UCM’s battalion is part of a military brigade that includes 41 different programs. In the annual awards recognition program, UCM captured first place as the Most Improved Battalion, second place as the Best in Recruiting and Retention, and third place as Best Overall Battalion.

“For a small university in the same brigade as many Division 1 programs, this is quite an accomplishment for our cadets and staff,” said LTC Bryan Vaden, a professor of military science who oversees the program.

UCM currently has approximately 85 cadets enrolled in ROTC. The brigade publishes criteria for awards in which a battalion must demonstrate success. In the area of recruiting and retention, for example, it considers whether or not a program is meeting its mission requirements, and if it will be able to meet its mission in future years through projected growth in recruitment, Vaden said. It also considers how training impacts the percentage of those cadets who go on to complete ROTC and become commissioned as Army officers, and if the program is leveraging national platforms for recruiting and increasing the amount of national scholarships received.

To be considered as Most Improved Battalion, according to Vadan, the brigade looks at criteria that include the quality of cadets and the cadre’s efficiency on administrative tasks. It also considers, “Are our cadets attaining higher GPAs? Have fitness scores drastically improved? Are our cadets placing higher on the national order of merit list, based on performance? Are our cadets going above and beyond with extracurricular activities and other voluntary programs to make themselves more well rounded?”

Criteria related to Most Improved Battalion also help determine the Best Overall Battalion, along with cadets’ performance and quality, and administrative timeliness and accuracy, Vaden said. All such criteria provide benchmarks for UCM to assess its program against some of the brigade’s best ROTC units.

“To me, the awards say that this program continues to perform at the highest levels while putting the training and success of the cadets first in everything we do,”Vaden said. “We place significant emphasis on academics and fitness and foster a family environment where cadets that join our program want to stay because they feel invested.”

He said the UCM ROTC program pushes its cadets beyond their comfort zones and introduces them to levels of personal excellence they did not know they possessed.

“As a result, the cadets we have that want active duty will likely get it, and most will get one of the top two choices in Branch,” Vaden said.

The Fighting Mules Battalion is affiliated with the Military Science and Leadership academic program at UCM. The battalion’s mission is to select, train, retrain, develop, and commission high-quality future leaders for the U.S. Army and the nation. Additionally, ROTC offers students an opportunity to earn a high-quality college degree while becoming a commissioned officer.

Further demonstrating the quality and success of the UCM Fighting Mules Battalion, Cadet Ty Cook, a junior from Harrisonville, Missouri, who is pursuing a Bachelor of Science in Criminal Justice, also was ranked as the #6 Cadet in the nation among approximately 7,000 cadets.

Learn more about the program, which has consistently been recognized locally and nationally as a top ROTC battalion, via email at ucmfmb@ucmo.edu or check out the program’s website at ucmo.edu/rotc.