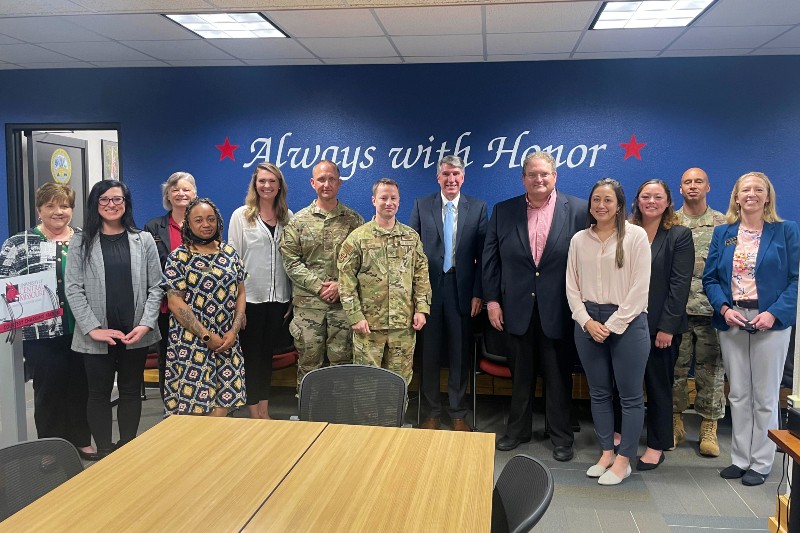 WARRENSBURG, MO – Building upon a long tradition of collaboration with Whiteman Air Force Base, which has contributed to its Military Friendly® designation, the University of Central Missouri recently hosted members of the 509th Bomb Wing and 442nd Fighter Wing command and staff for a tour of the Military and Veterans Success Center.

Coutney Swoboda, director of Military and Veteran Services, said her office extended the invitation to these individuals to meet with her staff and military support departments on campus. The visit took place in May and involved five representatives of WAFB and 11 individuals from UCM, including administrative leaders, President Roger Best and Provost and Vice President for Academic Affairs Phil Bridgmon.

“This provided us an opportunity to show the base the Success Center and all the services we provide our military-affiliated students on campus,” Swoboda said. She added that among many topics, “We discussed all UCM military benefits such as the Military Tuition Package, Active Military Tuition Rate, and in-state rates for service members and their family members.”

She noted that Military and Veteran Services processes all Veterans Administration educational and military tuition assistance benefits as well as military transcripts, which were discussed during the tour. UCM’s Whiteman Air Force Base site coordinator and Veterans Upward Bound staff were also present and spoke about their programs.

Swoboda said her staff appreciated the opportunity to meet with WAFB members in order to connect  the base and UCM, and to share more about the kinds of support UCM provides individuals who serve in the military. She hopes to plan additional meetings in the future that will involve base command and staff.

The Military and Veterans Success Center is a one-stop shop for active-duty military service members, veterans, and dependents, located in Elliott Student Union, Room 117. In addition to providing amenities such as computer stations, a family room with refrigerator and microwave, and conference room, its staff can assist students with questions about VA educational benefits, tuition assistance, military credit review, and finding campus and local resources.

UCM’s commitment to serving active duty military members and veterans was recognized earlier this year when the university was named to the 2021-2022 Military Friendly® Schools list of institutions at militaryfriendly.com. The list is created each year based on extensive research using public data sources for more than 8,800 institutions nationwide, input from student veterans, and responses to the proprietary, data-driven Military Friendly® Schools survey from participating institutions.

Individuals with questions about the Military and Veterans Success Center are encouraged to call 660-543-8776 or email vets@ucmo.edu.