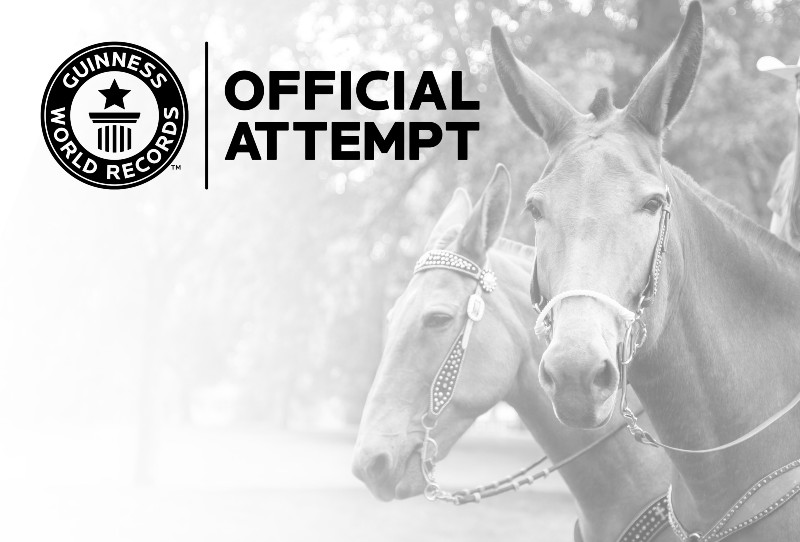 WARRENSBURG, MO (Oct. 18, 2021) – In a year that recognizes many rich traditions, the University of Central Missouri is going the extra mile to celebrate its longtime mascot. When visitors attend the 2021 Homecoming festivities, they can watch UCM attempt to achieve a GUINNESS WORLD RECORDS™ title for the largest ridden parade of mules.

An event that annually brings thousands of people to the campus and Warrensburg communities, the Homecoming parade is planned for 9 a.m. Saturday,
Oct. 23, and will feature its usual array of marching bands, floats, antique automobiles and walking entries. Along with that, mules and riders are coming from several Missouri communities to participate in the parade, where they will join in the record-setting attempt. The long string of mules and riders, along with other parade entries, will travel on a route that begins at the intersection of Clark and Holden streets, then runs north through campus on Holden and downtown to Gay Street, where it extends east to College Avenue, and north to South Street. The record attempt comes as the university celebrates not only its annual Homecoming but also the 150th year since its founding.

The mule’s affiliation with UCM dates back to the early 1920s. Following the institution’s name change in 1919 from the State Normal School for the Second Normal District to Central Missouri State Teachers College, it was decided a new name was needed for the CMSTC athletic teams. The former name of “Normals” no longer fit, and the name “Teachers” didn’t seem appropriate. During the 1921-22 academic year, the Athletic Committee conducted a “name the team” contest among the students. From more than 80 entries, which included the submission of names such as skunk, bobcat, and hippopotamus, the winning suggestion came from a member of the class of 1924, Chilhowee resident John Thomason. He believed at least one Missouri team should be known as the “Mules.” The mule mascot was officially announced and accepted at a convocation Feb. 15, 1922.

Building on the Mules moniker in athletics, in February 1974, Knob Noster resident Cynthia Almaguer, a member of the class of 1974, claimed a $50 prize in a contest that selected “Jennies” as the name of the university’s women’s athletic teams.

UCM today has two flesh and blood mule mascots. The senior member of this duo is Mancow, and the other mule is Molly. Both reside at the University Farm and are frequently seen at Mules home football games, the annual Get the Red Out street fair and other special events.

While the mule has endeared itself to UCM, it is also the official state animal in Missouri. Many years after the university’s founding in 1871, Missouri continued a proud tradition of breeding quality mules that were shipped from places such as Warrensburg across the country and overseas. They were used to farm the land, harvest timber, work mines, build roads, and even accompanied soldiers to war.

Learn more about the parade and other 2021 Homecoming events at ucmo.edu/homecoming.