While McCoy is Recognized for Excellence in Governance, SGA Also Honors Hicklin with New Award for Service in His Name 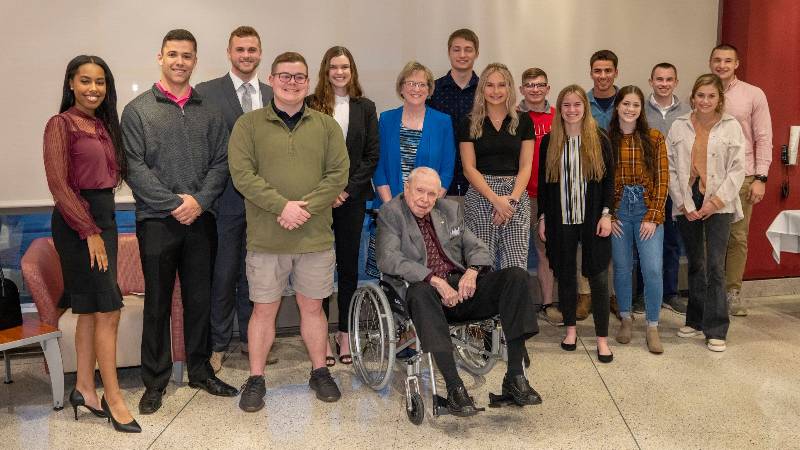 WARRENSBURG, MO – In addition to recognizing academic leader Ann McCoy as 2022 recipient of the annual James C. Kirkpatrick Excellence in Governance Award, the University of Central Missouri Student Government Association this week announced that an SGA resolution made possible a second honor that was presented alongside the Kirkpatrick Award. UCM emeriti member Walt Hicklin on March 22 became the first recipient of this new service award that has been established in his name.

Zac Racy, a student member of the UCM Board of Governors, made the award presentation to Hicklin during a ceremony at the James C. Kirkpatrick Library. Recognizing his “lasting impact” on students, the Walt Hicklin Excellence in Service Award, initially given to its namesake, will be presented by the SGA each spring to honor an individual directly associated with the university community who supports student success, demonstrates positive leadership, and serves the institution and its mission.

In his brief remarks, Hicklin, who was surrounded by family members and friends who attended the event, thanked the SGA for making the award possible. He noted that he is honored by the students’ actions.

“It is just a tremendous feeling to know what is represented here tonight,” Hicklin said in speaking about the award. ”I want to thank student governance [SGA] for this.”

Hicklin is a Warrensburg resident who retired from UCM in 2006 after 31 years of service.  He came to the university from Lee’s Summit High School, where he taught mathematics and served as head football coach. After enjoying a successful career in high school coaching, he was named head coach of the Mules football team in 1976, and continued to teach mathematics at the college level in the former Department of Academic Enrichment. His strong leadership ability contributed to him becoming Assistant Vice President for Student Affairs, and later Interim Vice President for Student Affairs, a position he held from 2004 to 2006.

During his tenure in Student Affairs, Hicklin received the Noel Levitz national award for a student retention program he designed and implemented. He also was named the first recipient of UCM’s annual J.P. Mees Award for Outstanding Professional Staff in 2003.

Following his retirement from UCM, Hicklin was appointed to the Board of Governors by Missouri Gov. Matt Blunt in 2007. He served two one-year terms as president of the board from 2010 to 2012. While working at UCM, he also was named to the Missouri Boys State Board of Directors in 1991, and to the Missouri Valley College Athletic Hall of Fame in 2002. Additionally, he is a former recipient of the SGA Excellence in Governance Award.

During his remarks, Hicklin encouraged students to “do your best,” and reminded faculty and staff of the influence they have as educators, asking them to remember “students hang on your every word.”

UCM President Roger Best introduced Ann McCoy, stating that in February 2022 she also was named one of the Ingram’s Magazine’s “2022 Icons in Education.”

“It’s regional recognition that speaks to who she is,” he told the audience.

Best pointed out the article noted that McCoy was inspired by the power of education in helping others to make their goals attainable. He said the article also stated that “one of the things she impresses among her students is that what you teach should never be more important than who you teach.”

In receiving the award, McCoy thanked the SGA for the honor, and added that the recognition is especially meaningful because it comes from students.

“Each day of my career, I’ve been really fortunate to be rejuvenated and inspired by working with young people, and getting to see first-hand that our futures are in good hands because you all are going to be in charge,” she told the gathering.

“Being recognized is very nice and very much appreciated but like with most awards the recipient – in this case, me – is one part of a very large group,” McCoy added. “I am so fortunate to work with people who are focused on the success of our students. Our faculty and staff go above and beyond every single day to make sure our students are successful, and I am honored and proud to be their colleague. It's really pretty easy to be the leader of a group when everyone is focused on a common mission, and every single day they come to work to fulfill that mission.”

McCoy is a UCM alumna who taught for 22 years in the Clinton School District as an elementary teacher, elementary math resource teacher, and middle school math teacher. In 2006, she rejoined UCM, originally for a one-year instructor position, although she fell in love with working alongside future teachers and helping them grow and develop as educators. After one year, her position became permanent, and she has continued serving UCM ever since. The longtime university educator has served as Chair of the Department of Elementary and Early Childhood Education, Chair of the School of Teaching and Learning, Associate Dean of the College of Education, and was appointed to her current post as college dean in September 2021.

McCoy began her journey into education at UCM by pursuing a Bachelor of Science in Elementary Education with a minor in Mathematics, which she completed in 1983. She earned her Master of Science in Curriculum and Instruction in 1988 from UCM, and while she was employed at the university she also completed a Ph.D. in Curriculum and Instruction with an emphasis in Mathematics Education at the University of Missouri-Kansas City.

Learn more about McCoy by clicking on the news release announcing her selection for the Excellence in Governance Award.