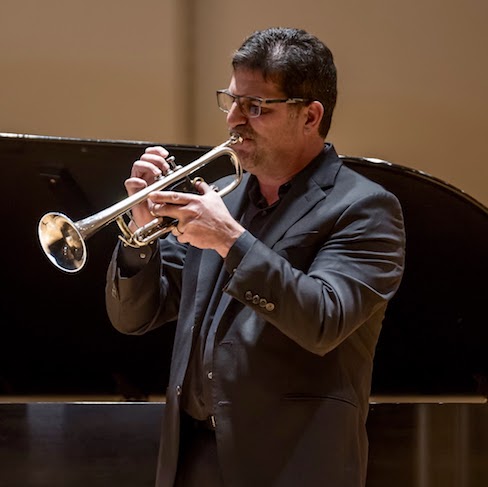 His performance career has been both extensive and diverse. For six years, he served as Principal Solo Cornet of the internationally acclaimed and award winning Fountain City Brass Band in Kansas City, and performed with them as both member and soloist in numerous concerts across the United States and in the U.K. He is a frequent sub with the Kansas City Symphony, and has previously been a member of the Amarillo Symphony and Opera orchestras, the Lincoln Symphony Orchestra, and the Nebraska Chamber Orchestra. He has toured as a chamber musician with the Empire Brass, Bluebonnet Brass, Nebraska Brass, and Kansas Brass Quintet and has performed on natural trumpet throughout the United States and Europe. Jazz and commercial experiences include performances with the Four Tops, Mannheim Steamroller, Lou Rawls, The Temptations, Tommy Tune and the Manhattan Rhythm Kings, contemporary Christian artists Michael W Smith and Ken Medema, and the Nebraska Jazz Orchestra and Boulevard Big Band. He has a keen interest in contemporary music and has been a featured performer at the College Music Society National Convention, Electronic Music Midwest, and as soloist in the premiere performance of Randall Snyder’s Six Tableaux for Trumpet and Orchestra with Orchestra Omaha.

Dr. Wenger’s former students have gone on to equally varied careers across the country as public school educators, members of full-time orchestras and military bands, jazz and commercial performers, and studio players. As an educator, he has presented numerous clinics in public schools and at the Missouri Music Educators Conference. He is a member of the International Trumpet Guild, appearing as a performer, clinician, or adjudicator at ten different conferences in five countries, as well as being a contributor to the Book Reviews and Recording Reviews columns of the ITG Journal. The UCM Trumpet Ensemble was invited to perform at the 2013 ITG conference in Grand Rapids, Michigan, and at the 2014 Missouri Music Educators State Convention, where they premiered new works by composers David Aaberg, Eric Honour, and David Shipps. Dr. Wenger’s arrangements of music for trumpet ensemble are published by Balquhidder Music.