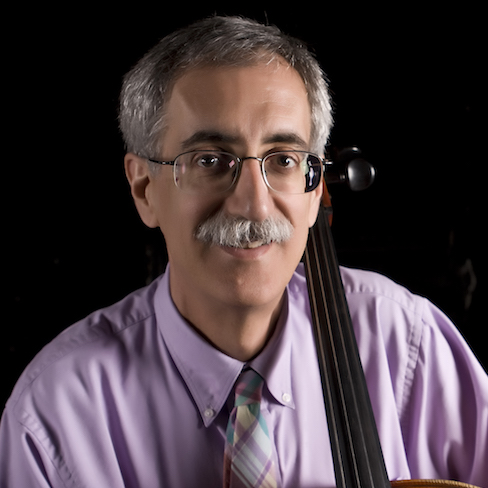 He received a D.M.A. in cello performance with a minor in musicology at the University of Arizona in 1984, where he studied with Gordon Epperson. He studied with Raya Garbousova at the Hartt School of Music, University of Hartford, where he received his M.M. His festival cello studies included David Wells at the Yellow Barn in Vermont and Gabor Rejto at the Music Academy of the West in California. His chamber music studies were with Theodora Mantz McMillan at Arizona and Rafael Druian and Renato Bonacini at Hartt.

In addition to his performing activities on solo recitals, in chamber music concerts, and as a soloist with orchestra, he was a founding member of the Humboldt Chamber Players, which performed for community concerts. He has performed as a member of the cello section of the Kansas City Camerata and in the cello section of the Kansas City Symphony. He has served as principal cello of the Lee’s Summit, Missouri Symphony since the orchestra’s founding.

Michael Bersin performed as a cellist and contributed cello arrangements on Celtic harper and singer Pamela Bruner's recordings. He has also been active in teaching and performing for summer music festivals including the California State University Summer Arts Festival, Chamber Music in the Mountains in Arizona, and the Summer Music Clinic at the University of Wisconsin.

Bersin has served as an adjudicator for instrumental solo and ensemble festivals in Missouri, Kansas, California, Oregon, and Arizona. He has written articles for American String Teacher and Strings Magazine.