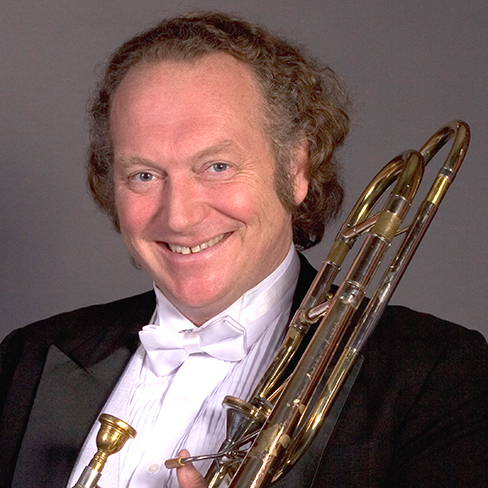 Roger Oyster has been Principal Trombone with the Kansas City Symphony since 1997. He has held that position as member or guest musician in the St. Louis Symphony, Atlanta Symphony, Detroit Symphony, Baltimore Symphony, National Symphony and Grant Park Symphony, as well as the Lyric Opera of Chicago. Since 1988 he has been Principal Trombone in the Grand Teton Music Festival in Jackson, Wyoming. He began his career in the United States Marine Band, where he was Principal Euphonium and Euphonium Soloist, and was featured as a soloist on more than 80 concerts and two national tours. He has been a Euphonium Soloist with the Kansas City Symphony, the St. Louis Symphony, Orchestra Iowa (Cedar Rapids, IA) and the United States Army Band, “Pershing’s Own.” He has played euphonium or bass trumpet with many orchestras including the Kansas City Symphony, Atlanta Symphony, Chicago Symphony, Detroit Symphony, St. Louis Symphony, Pittsburgh Symphony, Alabama Symphony, Oregon Symphony, Utah Symphony and the Hong Kong Philharmonic. He is the only person ever to hold both the position of Principal Trombone in a major American symphony orchestra and Principal Euphonium in one of our premier military bands. He can be heard on more than 70 commercially released recordings, including numerous Grammy-nominated recordings and two Grammy Award winners. He has presented masterclasses on both trombone and euphonium at numerous colleges and universities nationwide.